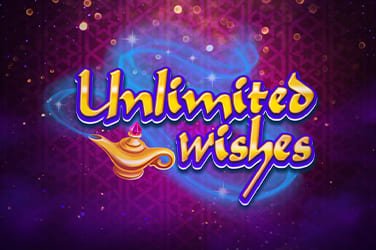 Unlimited Wishes has a fantastic design, smooth reel animations and crisp graphics. With the reels designed to look like they’re inside a real-life fruit machine, the game’s premise is a nice touch, but the graphics are a little old and don’t compare to some of the online casino games available today.

The soundtrack is bright and electro-themed, featuring sound effects on the reels and for winning combinations. The opportunity to thoroughly blend the audio here is appreciated and would be beneficial in all games!

If you like the genie-themed idea of this online slot, check out Blueprint Gaming’s Genie Jackpots Megaways. This slot game includes a whopping 15,625 pay lines to play with and four wild modifiers to keep things interesting.

Unlimited Wishes is a fruit-themed online slot has three reels, three rows, and five ways to win! This traditional slot game has wager amounts ranging from €0.10 to €300. Players who enjoy having fun and those who are willing to take risks can both play this online casino game because of the low minimum and high maximum limits.

It has a low variance and an average return to player percentage of 95.99 per cent. Before spinning, set your wagers to range from 0.10 to 300 coins, which will appeal to a wide range of players!

When it pertains to symbols, cherries are the least rewarding, paying only 0.5x the bet for three in a row! The lemon symbol pays x1, the plum x1.2, the grape x1.5, the watermelon x2, the star x3, and the three sevens x5. The golden lamp is the highest-paying regular symbol in this slot game, paying 7x the bet. On the other hand, the Wild Genie is the most valued symbol, as it not only substitutes for other symbols but also pays 35 times the bet!

In Unlimited Wishes, the reels will respin in two different ways, giving you another opportunity to win. The third reel will respin if two reels are occupied with the same symbol. Second, if one reel is loaded with the wild genie and the other two reels do not produce a win, the other two reels will respin. If all 9 slots on the reels are filled with identical symbols, the Infinity Magic bonus game will be triggered. Depending on where the indication stops, this bonus game multiplies your win by 12x.

The theoretical return to player (RTP) of the Unlimited Wishes slot game is 95.99%. This payback is above average for an online slot and is considered decent.