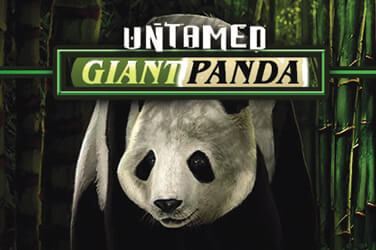 A trip to the jungle will await players who decide to give this Untamed Giant Panda online video slot game a spin, with free spins, wilds and gamble features all available to activate!

Microgaming has applied its expert touch on the graphics and visuals provided.

The game’s background features plenty of green plant life that pandas would typically be feasting on, whilst the symbols on the paytable have also been expertly designed.

These include traditional royal standard playing card values, as well as various picture images that range from vegetation as well as pictures of the adorable animal that are loved throughout the world, despite their numbers dwindling and being close to extinction.

This Untamed Giant Panda slot game is incredibly simple to play as Microgaming have provided bettors with a playing grid that consists of 5 reels and 3 rows in which the symbols can appear and form winning combinations.

Las Vegas Casino bettors are going to be able to enjoy a number of opportunities to win in this game, as there are a total of 243 ways to win!

A range of different Untamed Giant Panda bonus features have been made available by the developer in this title, with a range of symbols available to land that can help to trigger these rewarding moments.

The first is the game’s wild symbols, which are depicted by the game’s logo and this has the ability to replace all regular icons available on the grid to help form a winning sequence where possible. Those that land five of them on a payline will be able to win a payout of 500x as well!

A top Untamed Giant Panda bonus feature available in this game is the ‘Collect-A-Wild’ feature, as this can provide some top prizes. Players will see this appear at the bottom of the reel and when four have been collected, the entire reel will remain wild and stay locked for the next four spins!

The panda eye symbol is another bonus feature available in this Untamed Giant Panda slot game, and as it is the scatter icon, it has the potential of triggering the free spin feature, with 10 available to activate. In addition, if one scatter is needed to trigger the round and it is partially visible, then a nudge feature will help to push it into place.

During the free spins game, a ‘Brilliant Wilds’ game feature can be activated which means any wilds that appear will then be held until the end of the feature.

Lastly, those who are feeling lucky will be able to trigger a Gamble feature on each winning spin that they make. This feature is optional but can increase the size of prizes by double, although a loss will see these be wiped out.

The return to player (RTP) rate of this Untamed Giant Panda slot game is 96.40% and comes with a medium volatility level.

Las Vegas Casino players who love the panda and have a passion for playing slot games will simply love this Untamed Giant Panda title!

The bonuses can potentially make their experience as rewarding as possible, whilst the visuals provided are amongst some of the best!