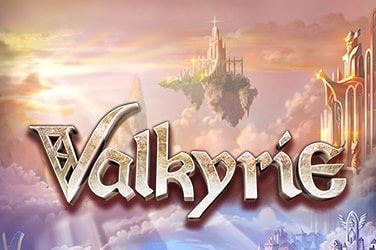 Special large icons, free spins and wilds can all be triggered in this Valkyrie online videoslot that is available to play immediately here at Las Vegas Casino!

ELK Studios have designed a brilliant slot game with their Valkyrie title as the developers have used some top graphics that can further enhance the overall gameplay experience provided to Las Vegas Casino players.

The game’s background features a number of twisted fairytale-like trees and jagged rocks that appear in purple colour, whilst the game’s paytable also features some expertly designed icons that are available for players to try and land.

The icons available include the famous Valkyries, with Freya (goddess of love) standing at the side of the playing grid watching on as Helena, Gena, Tyrsa and Andora make up the most valuable icons in this game. These are then followed by their weapons and then the traditional royal playing card icons that can be found.

Las Vegas Casino players will find that this Valkyrie online slot game has a playing grid that consists of 5 reels and four rows in which there are a total of 1,024 different ways to win available.

There are a number of special bonus features available in this Valkyrie online slot game from ELK Studios, thus providing players with the potential to win some rather big rewards whenever they are triggered.

The first is the Valkyrie free spins game which is triggered when players are able to land 3 or more free spins symbols anywhere on the reels. Players will be guaranteed one free spin with one of the randomly selected Valkyrie bonuses that can be triggered. These free spins can be retriggered.

The Valkyrie Bonus Spin feature is triggered when players land 3 or more of the silver bonus spin icons anywhere on the reels. Players will receive one free spin with a randomly chosen bonus feature.

There are a number of special wild sword symbols that can appear on the three central reels, with a sword icon that lands here being able to turn the reels completely wild.

The special shields that can be found on the reels can also trigger a special feature, with these becoming wild when they land on the reels.

The Arrow of Fortune feature will see golden arrows be shot towards the reels as they spin, with each arrow hitting the reels providing a player with a special large icon that can appear in either the form of a 2×2 symbol or a 3×3 symbol.

This Valkyrie online slot game has a return to player (RTP) rate of 96.3% and features a high volatility level, which means rewards may not be frequent but can potentially be rather lucrative.

With so much available to those that play this Valkyrie online slot game, this title from ELK Studios will satisfy the slot game hunger that we know our Las Vegas Casino players have in an abundance!