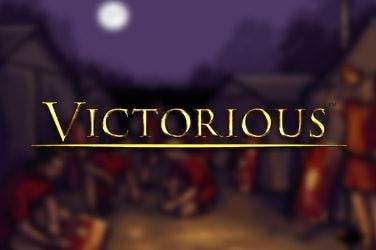 Ancient Rome is one of the most common online slot themes, so it’s difficult for any slot game developer to come up with a new twist, but NetEnt’s Victorious is a perfect example of why this slot designer is so revered. One of the most popular titles in the Las Vegas Casino roster of slot games, Victorious packs in plenty of ways to win.

NetEnt is one of the most experienced game developers in the world. The company was actually founded in 1996 and has gone on to build an excellent reputation in the online casino world, both for the quality of its slot games and its online casino titles. NetEnt even has several subsidiaries of its own, including well-known developers NetEnt Americas and Red Tiger Gaming.

This slot game draws its inspiration from the Roman Empire and offers a fresh take on the theme. Although it uses the standard card values A, K, Q, J, 10 and 9 to represent the lower value rewards, it also features some impressive renderings of notable Romans for the higher value icons, including the Emperor, who represents the highest payout of all. The graphical style is a notable departure for NetEnt and has an almost-cartoon quality, but overall, the graphics on display in the Victorious Slot are top class. The vibrant, rich colours also work well with the stirring soundtrack.

NetEnt is known for its highly rated and inventive slot games packed with player-friendly features, and Victorious continues that excellent reputation. It offers a five-reel layout, with an impressive 243 ways to win, rather than the standard payline mechanism. The minimum bet with this game is 25 coins while the highest is 250 coins, and the coin value ranges from 0.10 to 0.50.

The jackpot with Victorious is an impressive x1500 your stake, which is landed when you line up five of the Julius Caesar symbols, and the solid RTP of 96.9% is also worth noting.

Although there is no bonus game with Victorious and no link with a progressive jackpot network, there is a potentially rewarding Free Spins feature. To launch this feature, you need to line up three Scatter symbols, which take the form of a Golden Wreath, horizontally across the reels. Depending on the number of Scatters you line up, you could win 15, 20 or even 25 Free Spins. And as an extra bonus, all Free Spin wins are tripled.

It is tough to take a well-used theme and add something new to it, and although NetEnt clearly hasn’t tried to reinvent the wheel here, this doesn’t feel like an outdated game or theme. The presentation, soundtrack and solid game mechanic feel fresh and entertaining, and the use of a 243-ways-to-win approach is a pleasing change from the traditional payline option. Overall, this visit to Ancient Rome is definitely one that is worth repeating.

At Las Vegas Casino our focus is clearly set to provide you the best online casino games from the most sought-after game providers available.