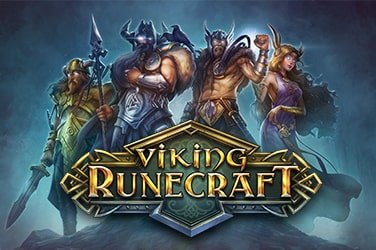 The Runes of Valhalla are one key to a good bonus when playing this video Viking Runecraft  slot game, but throughout the rounds, you’ll also get a helping hand from the cheeky Gods themselves with chances for wilds and symbol switches. Every time you win you charge the meter which gets you additional Charge of Destruction features which can refresh the core of symbols that appear and so give you a win. Free spins and 15 times multipliers may also be in play as you move through the game. In Viking Runecraft online slot you’ll win big if the gods are with you, there are four in total and if you clear your way through they can give you features such as symbols or wilds. The Runes of Valhalla Bonus feature is particularly worth having, and scored when every rune stone in play forms any five combinations. You can then win a bonus amount in this round by spinning the wheel.

This game has a 7×7 playing grid and wins come from cluster pays and cascading reels. The goal is to make a cluster of five matching symbols horizontally or vertically to win.

The maximum payout for this thrilling game is set at 5,000 times the bet per spin.

Viking Runecraft became an instant favorite for the Las Vegas Casino team thanks to its graphics and gameplay. Although it’s not the ultimate slot game we’ve played, we got enticed by the nordic-themed slot from the first spin.