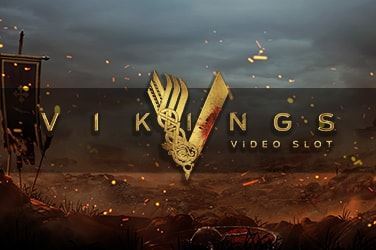 Based on the hit TV show, NetEnt have provided Vikings online slot and players at Las Vegas Casino are able to experience this brilliant title from one of the most established game developers.

With some amazing graphics, and featuring the main characters from the show, the game players will be able to go on this adventure with some extremely crazy bonus features that make this game a win and one that would be criminal to miss out on.

As mentioned, the visuals and graphics used by NetEnt for this Vikings online casino game are nothing short of incredible. The themes and images used have been taken straight from the TV show, although this should come as no surprise as the developers have form for producing these quality branded games. There is snow falling from the top of the video slot screen in this wintery background, whilst ravens sit alongside the reels to provide a rather eerie atmosphere.

There are a vast number of pay symbols available in this Vikings slot game, with 10 providing rewards. These include the traditional royal playing cards, three versions of the main character, Ragnar Lothbrok and one of Lagertha.

There are also a couple of bonus icons, with the gold ‘V’ icon, as well as the game’s scatter that is represented by a shield that has blue and red colouring and features the words ‘Raid Spins’. But more on that, later.

Players who play this video slot game will initially be met with a playing grid that features 5 reels and 3 rows. This particular playing grid provides players with the opportunity to win from 243 ways. However, one of the Vikings slot bonus features can see this grid expand to a huge 7 rows and push the total number of paylines to an incredible 78,125!

Furthermore, this slot can be played on a mobile device, therefore bettors are able to go on this Norse-themed adventure slot game from wherever they please.

‘Random Shield Wall’ bonus feature may be triggered by those playing this Vikings video slot, as it can be randomly triggered on any spin taken. It will either provide a wall of 3×2 or 5×2 and can be positioned anywhere on the reels where it will reveal one character icon or the gold ‘V’ icon.

The ‘Hot Spot’ bonus game is available as well, and when triggered, it will highlight certain reels. The third reel will be the only reel that is covered and this will only happen when one of the four character icons available appears fully stacked on the designated area of the Vikings slot playing grid. All of the other character icons that appeared on the same spin in different positions will turn into that triggering symbol and a payout will be provided depending on the number of them available.

The ‘Raid Spins’ feature bonus in this Vikings slot game is where players are able to trigger the expanded playing grid. When they land the Shield scatter icon on reels 3, 4 and 5 in the same spin, they will see the grid become larger than life! This feature will also see the other two bonus features come into play, as well. For instance, the ‘Hot Spot’ areas of Viking game will increase and cover the three middle positions of reels 2, 3 and 4, whilst the low-value icons will appear in stacks of 5. The ‘Shield Wall’ feature of the Vikings online slot game can also be activated but only when ‘Hot Spot’ is not. The size of the shield can be either 4×2, 5×2 or 5×3.

Players are able to play this online casino game from as low as €/£/$0.20 on each spin that they make, although bets of up to €/£/$100 are also possible for those that want to win the biggest riches available. This Vikings slot has a return to player (RTP) rate of 96.05%, which can be considered rather average for many of NetEnt’s other titles, and works rather well with the medium volatility level that has been provided.

There is no doubt that this Vikings online slot rom NetEnt is incredibly impressive and one that will provide players with bundles of fun. Of course, the expanding playing grid, the potential to win from 78,125 paylines and the sensational bonus features made available only add further incentive to play this game, although the outstanding graphics used should also make those who have never seen the hit TV show want to play this brilliant slot game as soon as they can!