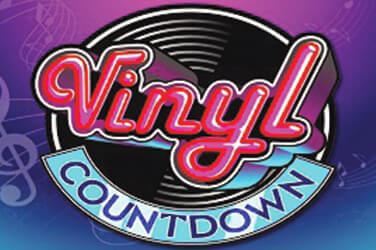 Wilds and Scatters are all available in this highly simplistic Vinyl Countdown slot game provided by Microgaming, as well as an RTP rate of 95.56%!

Las Vegas Casino players will be able to get groovy to some of the best vinyl tracks at what would appear to be an American Diner-inspired slot game based on the musical “Grease”.

Although the background of the game does not particularly highlight anything like that as it is solely a purple colour, the icons that are available on the paytable of this Vinyl Countdown slot game would suggest it is.

There are a number of different treats that would be found on a menu in such an establishment, whilst these are then followed by icons that would represent a dancing theme, such as dance shoes, two loved-up groovers, a girl, a guy and the game’s logo!

Players dancing to this Vinyl Countdown slot game will be able to play it as they dance away as the game is incredibly simple to play and enjoy.

The playing grid to have been provided by Microgaming consists of 5 reels and 3 rows, as well as a total of 9 fixed paylines that are in play with each spin placed.

Special icons will play a role in helping Las Vegas Casino bettors to be able to keep this Vinyl Countdown game remaining as interesting and enjoyable as possible.

The first is the slot game’s wild icon, which is depicted by the jukebox that can be found on the playing grid. Players who are able to land this will be able to use it as a traditional wild icon, as they will see it act as a substitute for all regular icons to help form additional winning sequences where possible.

There is a scatter icon available in this game, with the icon being shown as a disco ball that shines down on the grid. If it lands three or more times on a single spin, it will provide players with an instant reward that can be rather lucrative!

Vinyl Countdown video slot game has a return to player (RTP) rate of 95.56%.

Las Vegas Casino players not deterred by a potential lack of Vinyl Countdown bonus features can place a minimum bet consisting of €/£/$2.25 per spin, or a maximum bet of €/£/$18 per spin when going for the biggest rewards on offer!

Whilst it might not be “It’s The Final Countdown!”, this Vinyl Countdown slot game will certainly have players jiving when they are able to land the jukeboxes that are on offer!

With simplicity at the heart of it, there is plenty to enjoy whilst the prizes can still be rather lucrative when each of the special icons available land for players!