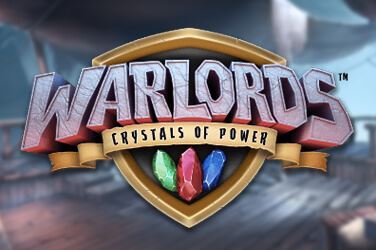 Founded in 1996, but with its roots going back to the 1960s in the European real-world casino sector, NetEnt is one of the longest established and most popular games developers in the world. This company has taken its place amongst the best and the biggest and features heavily among the collection of top online slots in the Las Vegas Casino’s collection, with Warlords: Crystals of Power being one of their most popular and distinctive slot games.

This is a fantasy-themed video slot with high production values which features an interesting fusion of Middle Age combat between a trio of warriors, each searching for a mighty crystal which will determine who will be able to claim victory and take on the title of supreme ruler.

Each of the rulers in the Warlords: Crystals Of Power slot game is helped by a ferocious creature, with the options ranging from stealthy panthers to snarling wolves, and there are even warthogs in the list of options. This helps to provide a continuous level of excitement and danger, enhanced by the Warlords: Crystals Of Power slot’s full HD graphics and its fantastic animation which is supported by a strong soundtrack, which takes on a darker edge at the right times.

This video slot is a traditional 5-reel and 3-row layout, featuring 30 fixed paylines, handy Wilds and three free spins bonuses. The RTP value of the Warlords: Crystals Of Power slot game is 96.89% which is one of the best we’ve come across for a modern high-quality video slot.

The Warlords: Crystals Of Power slot game allows you to choose your bet size, which ranges from €/$/£0.15 to €/$/£150 or if you like to play with the maximum regularly, you can opt for the Max Bet feature.

The symbols on the slot game reels of Warlords: Crystals Of Power game are beautifully realised, and the highest value options here are the Wilds, which consist of the Samurai and the Crystals of Power. The Wilds of the Warlords: Crystals Of Power slot game can replace any other symbol in the game, apart from the Scatters, which are represented by the Hammer, Arrow and Swords. And if you can line up five of the Wilds on a payline, you will get a x20 reward.

One of the handiest features is the Random Overlay Wild which can trigger itself randomly during each spin while you are playing the main game.

The other bonuses of the Warlords: Crystals Of Power slot game include the Priestess Free Spins, which is triggered by the green Scatter, while the blue Scatter launches the Barbarian Free spins and the red Scatter opens the Samurai Free Spins feature. All of these game bonuses are worth playing in their own right, but if you can land more than one Scatter, you will launch the Battle feature, in which all three warlords fight, leading to more free spins.

In terms of player-friendly mechanics, the Random Overlay Wild bonus is an excellent feature, and when you consider the slot game’s high RTP and regular small wins with this slot game, it is one that players are sure to rate highly. We were also impressed with the range of betting features available with this game. Overall, Warlords: Crystals Of Power is a high action and entertaining slot game with plenty to enjoy.

Find more of the best slot games like Warlords: Crystals Of Power in our selection of online casino slots and table games are here at Las Vegas Casino. Put your tuxedo on and walk through our casino pages in the comfort of your home but the same excitement of Vegas.