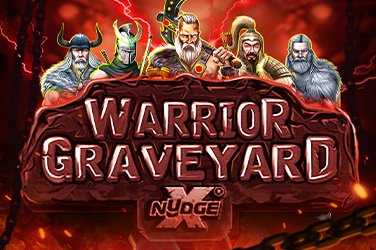 Warrior Graveyard xNudge video slot features 25 fixed pay lines, 3 rows, and 6 reels. To win, players must land at least three matching symbols running only from left to right. The RTP for the game is 96.16%, meaning players are in with a chance of taking significant winnings despite its volatility. There is also a DX1 version offering an RTP of 94.14% and two Bonus Buy versions which respectively push the figure up to 96.2% and 96.62%.

Thanks to its array of features, players of Warrior Graveyard xNudge can win up to 9,197 their wager.

One of the most striking features of Warrior Graveyard xNudge is the quality of its breath-taking gameplay. After logging in to the game, users are treated to realistic fog, scary gravestones, and eerie skeletons, as well as a gripping soundtrack designed to make gaming sessions tense and exhilarating. There are also a number of animation sequences that are sure to impress even the most experienced video slot players.

In terms of the symbology used on the reels, the low end of the pay-out scale starts with battle items such as axes, shield, swords, helmets, and hammers. Warrior skeletons are a little more lucrative symbols, so look out for blue, green, red, orange, and grey coffins. The wild and scatter symbol is a skull with a gold helmet.

The xNudge Tombstone Wilds are three-symbol graveyard symbols that may land on slot reels two, three, four or five. If one appears, it will nudge into view and the wild multiplier will be increased by one for every nudge. If you land more than one in a winning spin, you could increase the multiplier by up to 12!

There are 2 Free Spins features available in Warrior Graveyard xNudge. To win them, you must achieve:

You can also buy these bonus features if you don’t want to wait to trigger them during gameplay.

This feature is activated whenever players land three matching warrior skeletons on different reels. They will increase the multiplier by one for every nudge.

Warrior Graveyard xNudge offers a truly nerve-wracking gaming experience for keen slot players. Its superior graphics make it one of the most exciting games on the market, while its potential wins are attractive for players of all types.

Enjoy one of the most realistic online gaming experiences at Las Vegas Casino playing the ultimate and popular online slots and live dealer table games. Let us know what you think of the Warrior Graveyard xNudge slot by rating it.