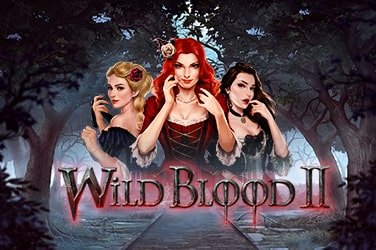 Following on from their impressive Wild Bloods II slots game, Play’n GO have provided players with a second instalment that follows the vampire and Halloween theme that was introduced in the first title.

With a bone-chilling backdrop that features some rather chilling animations in a dark, gloomy forest, the scene has truly been set in this Wild Bloods II slots game really helps to bring the experience felt to life.

The icons found on the paytable of this video slots game includes the traditional playing card values – 10, J, Q, K and A – whilst these low-value icons are followed by a dagger, a skull and the three attractive women known as Laura, Margaret and Rebecca.

With a playing grid consisting of 6 reels and 3 rows, this Wild Bloods II online slots game features an extra reel compared to many of the other slot titles available to play. With the addition of a sixth reel, players are able to form more winning combinations, with 4,096 ways to win available!

There is a game panel in the Wild Bloods II slots that is available at the bottom of the playing grid, which is customary of many of the Play’n GO titles, as it features many of the same options, such as being able to alter the wager being set.

There are a handful of great special bonus features and games available in this Wild Bloods II online slots game, with some special symbols having been made available to collect and helping to activate them.

The first is in the form of a wild, which is the vampire of this online slots game. The vampire has the ability to help form more winning combinations when possible as he can substitute for all Wild Bloods II slots regular icons on the paytable. However, if he fills the right-most reel fully, the ‘Vampire Bat Respin’ will be activated, which will see the reels be respawn for free once.

The blood vial scatter icon of the Wild Bloods II slot can help to trigger the ‘Bloodlust Free Spins’ bonus game, but 3 or more of these are required to appear on one spin. Here, players will receive between 10 and 25 free spins but this will depend on how many icons land on the grid.

Wild Bloods II slots players will also get to choose their female vampire of choice and unlock their unique power. The blonde, Laura, will see game’s wild icons expand up and down the reel when they appear, whilst Margaret (redhead), will collect the wilds that appear with each four collected providing a further two spins and a win multiplier increasing by 1x.

Rebecca will increase the win multiplier by 2x or 3x when a wild appears on the reels.

The game has an RTP rate of 96.18%, which sits at around the average rate that many of the developers have used.

Some like horror themes and those that contain vampires, whilst others do not. However, if you are a fan of online slots games, then Wild Bloods II by Play’n GO is one that needs to be played.

The excellent graphics and animations involved help further the experience, but the bonus games in regards to the Wild Bloods II free spins on offer as well as 4,096 ways to win certainly make it rather rewarding!