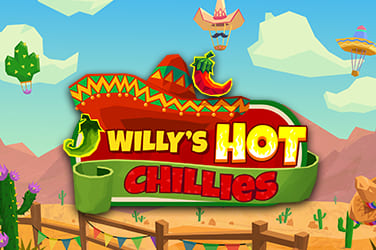 Inspired by Mexico, Willy’s Hot Chillies slot game features numerous bonus features and a 96% RTP rate that can provide some rather tasty rewards!

Unsurprisingly given the name of this slot, Willy’s Hot Chillies is a title developed by NetEnt that has taken inspiration from Mexico and used it as the theme in a number of various ways.

The game’s background features a typical Mexican setting as fun visuals have been used, including the image of a cactus and a sombrero, whilst the symbols on the paytable of this game have also been provided the same detail.

The icons include the traditional standard playing card suits, which are then followed by tacos, hot chilli sauce, pinatas and a box full of gold coins.

Although things might be a little spicy for Las Vegas Casino bettors, the gameplay experience is a little easier to handle as it follows a rather simplistic nature and one that all players are able to enjoy.

This is because NetEnt have provided a playing grid that consists of 5 reels and 3 rows, as well as 20 fixed paylines in which identical icons can appear adjacently and form winning combinations of 3 or more to complete a sequence.

There is a range of Willy’s Hot Chillies bonus features to look out for in this online slot game, so it is best to get going with them now!

When trying to form wins, players will have the ability to increase their total prize amount by landing multiplying wilds on the gird. The red chilli is the game’s wild and this can come with a multiplier of either 2x, 3x, 4x or 5x the bet attached to it. Players who are lucky enough to land two of these on one spin will see the multipliers be added together, whilst these special icons can also appear stacked

Further Willy’s Hot Chillies bonus features include the Willy’s Hot Wheel game, which can be triggered when a bonus icon lands on the first reel and is followed by a wild on any of the other ones.

A separate set of reels will be provided where players will then be awarded one of the following rewards after any wild multipliers that caused the bonus to be triggered are turned into fire pointers:

Coin Win: land a prize of 1x to 30x your stake
+3 spin: get 3 more spins of the Hot Wheel
Extra: one more reel turns into a fire pointer
Chillie Multiplier: increases your chilli multiplier by one

Each prize that is on offer in this Willy’s Hot Chillies bonus feature will be multiplied by the Chillie Multiplier, therefore wins can be potentially huge!

The minimum bet that is possible to be placed on the reels of this Willy’s Hot Chillies video slot game is €/£/$0.20 per spin. However, Las Vegas Casino players who like the heat will be able to place a maximum bet of €/£/$400 on each spin that they choose to make!

96% is the return to player (RTP) rate for this medium variance Willy’s Hot Chillies slot game from NetEnt.

Players will certainly be feeling “Hot, Hot, Hot!” when they play this Willy’s Hot Chillies online slot game as the heat has been turned up in this game significantly, with Las Vegas Casino players able to potentially win some lucrative rewards!