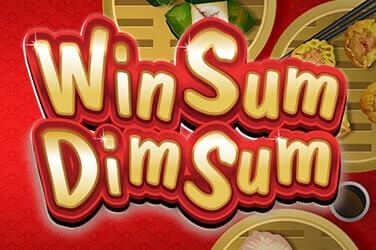 Dimsums are perhaps one of the most popular items from Chinese cuisine globally, with dumplings being found all over the world at Asian and Chinese eateries. Thus, a video slot game based on this popular delicacy comes as no surprise, with Win Sum Dim Sum online slot being developed by Microgaming. Players will be greeted with a predominantly Asian theme in this online slot game, and dim sums will form the centerpiece, showing up in various forms on the reels.

As stated earlier, the Win Sum Dim Sum online slot game has an Oriental theme, with a typical Chinese restaurant serving as the backdrop for the reels. Various Chinese delicacies, such as lotus rice, chicken feet, shao mai and har gow are symbols on the reels, as well as the aforementioned dumplings, which, while paying out handsome rewards if they land in combinations, may just make players hungry as well! A bamboo steamer is the video slot’s Wild symbol, while a teapot is the Scatter.

Win Sum Dim Sum slot game has five reels and nine paylines. The Wild can substitute for all other symbols except the Scatter on the reels, helping to create winning combinations. Landing a wild on the middle reel will transform that entire reel into a Wild reel, further improving your chances of winning big, with a maximum win of 1,222x possible in this scenario.

Landing three or more scatter symbols anywhere on the reels will trigger the free spins bonus round.

Players receive 15 free spins in this round, while the benefit of the expanding wilds is now extended to the three middle reels. This means that you can potentially receive three wild reels in just one free spin if you are lucky enough! The free spins can also be retriggered if you land three scatters again, meaning that there are a total of 30 free spins that can be potentially won. With the three wild reels, players can win up to 3,333x of their stake in this round.

This is a simple yet entertaining online slot game with a unique take on a common theme, where even the base game has the potential to win you huge rewards. The medium variance of the slot game means that Win Sum Dim Sum slot players can build their bankroll gradually, while the huge win potential is what will keep players coming back for more. The expanding wilds are the obvious attraction for Win Sum Dim Sum, and this, combined with the dim sum theme, makes this a very good and attractive video slot game from Las Vegas Casino that will be especially attractive for those looking for big wins from their slot games.