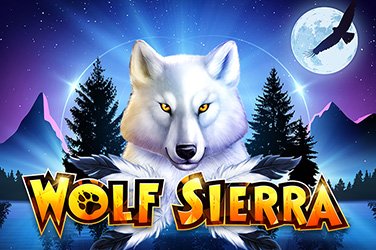 Of all the many animals and beasts to feature in modern online slots gaming, the wolf appears to get more attention than the rest, and Tom Horn Gaming have added to the modern selection of wolf-themed titles with this intriguing effort in Wolf Sierra.

Tom Horn is one of the newer slots developers out there, having been set up in 2008, but in a little over a decade they have built up an impressive reputation, not to mention a wide customer base, and there is a solid collection of the pick of the Tom Horn games at the Las Vegas Casino site.

In Wolf Sierra online slot the game reels themselves offer a handful of appropriate symbols, though as usual in a modern slot, the familiar card values from 9 to Ace represent the lower paying wins. At a higher value game symbols, you will find the Grey Wolf, the Totem and the Eagle. Wolf Sierra slot theme as also a White Wolf Wild, that can substitute for most of the other symbols and a Dream Catcher Scatter, that helps launch some of the main bonuses.

As our casino game review team could analise, there are three handy bonus features in Wolf Sierra video slot : the Wild feature, the Scatter bonus and the always-popular Free Spin options.

In Wolf Sierra slot the attractively illustrated White Wolf Wild plays a significant role in the gameplay. This symbol can land stacked on the reels, but it is at its most lucrative when forming combinations of its own, which can in theory land the x2000 maximum payout if all the reels are covered.

In Wolf Sierra slot the Dream Catcher icon, which represents the Scatter function, appears only on the central three reels, but when they land, they can trigger 5 Free Spins. Once the Free Spin game mode is launched, there are a couple of helpful extra bonuses. Every new Scatter that lands will earn you another Free Spin, while any Wilds that land on the reels will turn into a new sticky version of the Wild, featuring a wolf howling at the moon, which can help you to land further pay-outs.

The wolf theme of this online casino game has been done before, and in terms of presentation, Tom Horn have not come up with anything new here, but the graphics are nicely done and the sound is excellent. Above all,in Wolf Sierra the basic gameplay is solid, and there are sufficient bonus features to retain the interest of most slots players, making this a good all-round slot gaming option.

At Las Vegas Casino we aim to reach a seemingly experience of gambling. Our online casino has the most sought after game titles like Wolf Sierra slot game. Rate this slot game here and check our slot games page for more.