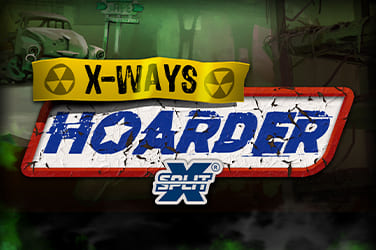 xWays Hoarder Well we should start by stating Nolimit City has done it again! From a small company with barely any slot games to write home about, they have been releasing hot slots one after the other and this is no different. Say hello to Karen, Hovenberg, Moonshine King and make sure that you’re more of a hoarder than this bunch with 243 win ways and the new xSplit Wilds mechanic!

The action occurs on a 5×3 sized grid, starting each base game spin with 243 ways to win, which can expand up to 95,760 ways once the xSplitting and Xways come into play. It seems like judgment day and Armageddon has come, the backing music sounds as if it’s playing through a transistor radio. It’s upbeat and a little like that gramophone is left playing amongst the chaos.

Land 3 or 4 of the normal/super scatter symbols, the Bunker Raid Spins are activated which welcome you with 7 and 10 free spins respectively. During these spins, all xWays symbols that land will be sticky for the remaining spins, in addition, each such symbol will give 1 extra spin.

These xWays symbols are where it gets exciting and you will see this once they land, they will land at the lowest non xWays symbols position on their respective reel. Once it has done so, it will be merged with any sticky xWays symbols which already are on that reel.

If you had landed super scatter symbols at the time of activation, these symbols and the underlying positions will be transformed into xWays symbols.

Within this Bonus, you can take part in a Hoarder Level Up feature, where the higher levels create significantly better conditions. You level up by collecting 3 xWays symbols and the different levels do the following:

1st level: By collecting 3 xWays symbols, the lowest paying objects and character symbols will disappear from the reels.

2nd level: By collecting 6 xWays symbols, also the second lowest paying objects and character symbols will disappear from the reels.

3rd level: By collecting 9 xWays symbols, the third lowest paying objects and character symbols will also disappear from the reels.

The RTP (Return to player) does vary amongst casinos but here it is a respectable 94.10%, with its minimum stake set at €/£/$0.20 and the maximum stake coming in at €/£/$100, whatever the stake this slot game can provide some huge payouts.

Las Vegas Casino players will be screaming with excitement with this unique featured slot. It’s fun and exciting but be cautious as this videoslot as it’s volatility is extreme.